Quinoa (pronounced: keen wa) has exploded into the health world, and rightly so! Everyone by now has heard about Quinoa and its one of my favourite foods to cook with. It’s actually been around for ages, it was a staple food of the ancient Inca civilisation and they used it as a source of energy to increase strength and stamina.

Quinoa is a good complete source of protein because it includes all nine essential amino acids. It also contains many vitamins and minerals such as, magnesium, iron, manganese, riboflavin (B2). Quinoa is a great alternative for people who have problems with gluten because its gluten-free. It is actually a seed and not a grain like a lot of people think it is. Quinoa is also loaded with fibre, so its great to get the digestive system moving!

The trick to making Quinoa porridge is to use Quinoa Flakes. The brand I use in Dubai is called O.A. Quinoa, found in the Waitrose gluten-free and organic aisle. It is organic and pre washed to get rid of Saponins, a bitter coating found on the outside of the quinoa seed. I find using the flakes creates a creamy consistency. Let me show you how easy this is to make! The following makes 1 portion. Ok, lets go!

My favourite combo is adding coconut oil, chia seeds, crushed almonds and blueberries. Another one is cinnamon, sliced apple and organic raw honey. Or perhaps try another favourite of mine, cacao nibs, crushed hazelnuts and organic maple syrup. Just get creative and you will soon discover your own favourite combo!

Subscribe to my newsletter for more travel & health related tips. And never miss a thing! 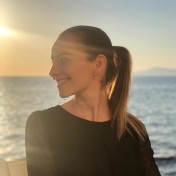 Lover of all things Health & Wellness - World Traveller - Born in NZ - Based in Dubai - Follow me on my healthy adventures!

This site uses Akismet to reduce spam. Learn how your comment data is processed.

Welcome to the healthy jetsetter

I love to travel & have a slight obsession with healthy living. So here I have created a space to combine the two & share my healthy lifestyle experiences both at my base in London & around the world.

LOOKING FOR HEALTHY TRAVEL INSPIRATION? SIGN UP TO MY NEWSLETTER!

Just waiting for the next @heartcorelife class💕

Sometimes its simply a good idea to get out of the

Always on the hunt for an awesome matcha latte. @t

I’m very excited to share this info on my friend

While everyone is still sleeping 💤😴 #goodmor

Back again for another F1 Abu Dhabi Grand Prix! So

I passed by @wulfandlamb for the first time today

Patiently waiting for the beautiful bride to walk

Our morning and evening view from our balcony in t